Life isn't what it is supposed to be. 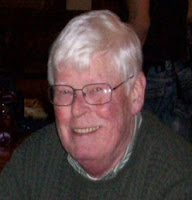 Life is the way it is.


I found that quote somewhere the other day, wrote it down on a sticky note, and posted it on my desk. My life certainly hasn't been what it was supposed to be these past couple of months. My husband Bate died on August 3rd after battling lung cancer for several months. The end happened much faster than his doctors had thought and much sooner than I wanted it to. I wasn't ready to lose him. But then, when would I ever be ready for that?

While I was planning Bate's funeral, the assisted living facilty where my father lived called. Dad had pneumonia, dangerously low blood pressure and oxygen levels. they were taking him to the hospital. The day after Bate's military funeral, my dear friend Diane drove me up to Massachusetts. Dad was not good and a final evaluation determined that he would have to be moved to skilled care. Arrangements were made, I visited a lot with Dad, and, with Diane's help, I cleaned out his apartment. I said goodbye to Dad and Diane and I drove home. The next morning the nursing home called. Dad had passed away.

And that is why I have been away from Kensington Contemplations for so long. Bate was in and out of the hospital throughout the spring and summer, and August passed in a blur. It was the worst month of my life and for the first time in my life, I found no comfort in putting pen to paper.

But I am finally writing again, scribbling story ideas on scraps of paper, venting in my journal, and even making a little progress on my next book. My broken heart still has not pieced itself back together and there are still many days when I am, as I say, very wobbly. Grief sucks, but how we handle it is what makes the difference. I couldn't have made it without the love and support of my family, friends, and coworkers, who rallied around me, hugged me when I needed hugs, let me cry when I needed to cry, and said "It's OK," in so many little ways.

I do want to end this blog post on a lighter note. Even when days are just as dark as they can get, life comes around and hits you in the face with its equivalent of a cream pie. I was on the phone planning Dad's funeral. I was quite proud of myself for being as calm as I was. And then my house start to shake. I calmly said that something was happening, my house was shaking. The windows started to rattle and I not so calmly shrieked into the phone, "My house is falling down!" and dashed out the door. I'm not even sure I hung up. I realized when I saw all my neighbors out on the street that my house wasn't falling down and neigher were theirs. After a confab in the street we all agreed it had to be an earthquake. But an earthquake in Virginia? Sure enough, a 5.8 quake rattled its way through the state and up the East Coast. The epicenter was only about 50 miles from my house. Fortunatley, there was no damage to my house, just some shaken nerves and three angry cats -- I ran out of the house without a thought for them. And by the time I called the funeral home back to apologize, they'd already survived their own rock and roll.
Posted by Pamela at 4:57 PM 1 comment: