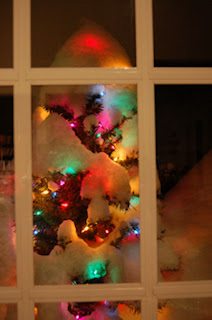 'tis the season for fighting with Christmas lights, wrapping paper, getting writer's cramp from all those "short" updates on cards, and praying you haven't forgotten anything important, like thawing the turkey. And you know what, I wouldn't trade a minute of it. Oh, sure, I complain like crazy about how tired and stressed I am, but it isn't completely true. I am a Christmas addict, plain and simple. I might order gifts online, but they are chosen with the giftee in mind. I might curse the tangled lights, but there is now way I wouldn't put them up. I may get annoyed with Brillo and Bailey who insist on offering their kitty expertise for gift wrapping, but it is all part of the fun.

The Christmas addiction of mine is one thing I can blame entirely on my mother and father. It really is true -- it's my parents fault. Some of my fondest memories of the holiday season are setting up the Christmas scene with my mother every year. She had a collection of miniature felt and wax figurines that we would arrange on the fireplace hearth every year. There was the nativity scene, with little white sheep and golden angels. It was always separated from the snowmen and Santas by flocked wire evergreens. The church always held center stage on the mirror that masqueraded as the frozen pond. Skaters endlessly skated in the same spot around the "ice."

Mom and I would carefully unwrap each treasured figure while Dad put the tree together. For years it was one of those aluminum trees which I outwardly declared my disdain for, in inwardly cherished. I could sit for hours in the darkened living room watching the multicolored play of lights on the reflective "needles."

Christmas has changed so much over the years. I still have the Christmas scene figurines but no longer put them out. They may have survived years of sun and hot and cold, but I doubt they would survive the attack of the cats. The aluminum tree has long since been replaced by faux Frasier firs. New traditions have taken their place -- a collection of stuffed mooses have replaced the Christmas scene. Bate and I open gifts on Christmas morning instead of Christmas Eve. We pass on a Christmas tree as the kitties already have enough toys.

The one thing that hasn't changed is the rush of preparation, the running around to get everything done, the haste to hang the Christmas lights before fingers freeze off.

And I still wouldn't trade a minute of it.
Posted by Pamela at 3:44 PM No comments: